Greetings in the name of our Lord Jesus Christ!

Mengo Senior School, located on Hoima Road Plot 422, Block 10, was founded in 1895 by the Church Missionary Society (CMS) making it the oldest school in Uganda. It is a co-educational government aided school with a current ratio of 1:2 girls to boys.

It offers general academic subjects, vocational and technical subjects, 29 in number. The school, though Church of Uganda Founded, admits students of all faiths. It provides secular education which is in line with the Uganda national goals and objectives of education. The school recognizes the changing global trends and has always organised and re-organised its curriculum to suit the needs of the changing  world, aligning it with the national curriculum.

The school was founded and is owned by Namirembe Diocese, Church of Uganda (Anglican). The Foundation body nominates 5 (five) members to the Board of Governors; one of whom is the Chairperson. The current chairman of the Foundation body is Rt.Rev. Wilberforce Kityo Luwalira – Bishop of Namirembe Diocese. (See Education (Pre-primary, Primaries and Post – primary) Act 2008, Section 58, 59 Part II sub-section (a)).

History of the school

As earlier mentioned, the founding of Mengo Senior School dates to the early days of the missionaries in Uganda. In their effort to preach the Word of God and win the souls of Ugandans, they soon discovered that formal education was one of the strategic baits to convert people from their “heathen ways”.

Thus in 1895, an elementary mixed school (Kayanja) was founded at Mengo, the then capital of Uganda. Its location and appearance is described by Amos Kalule Sempa in his article; “African schools, (1941)” as thus: “The first building of this school was situated between the present Namirembe (Mengo) primary school building and Namirembe Cathedral. Its walls were made of reeds and the roof was of grass”. One of the founder teachers was a missionary called Miss Chadwick. She started by inviting a number of young men into her house. These were mostly houseboys of missionaries of Namirembe Hill. Initially they came into her house every afternoon for prayers and other subjects. She then requested them to visit the chiefs and ask them to send their children to school. Due to the nature of their work, these young men came to be known as Basizi (sowers). When the newcomers would come, they would be taught by Basizi while Chadwick taught the Basizi.

In 1901, Mr. Charles William Hattersley took over the work of teaching the Basizi. As the number grew it was found necessary to house them in a boarding school. The then Katikkiro, Sir Apollo Kaggwa gave them his house on Namirembe Hill where they stayed for some years. Most of the first students who enrolled in Mengo (Kayanja as it was called) were later on posted by Church Councils to rural areas as school masters. Many others became clerks to chiefs. It is important to note that many of the big chiefs also attended classes in this school.

Although Mengo was a mixed school, it was very difficult to bring girls to school. While commenting about the education of women, the (Headmaster of Mengo), Mr. C.W. Hattersley (1901 – 1912) wrote: “The question of the education of women in heathen and Mohammedan lands always presents a great difficulty, accustomed as they are to be looked upon as slaves” There was not a lot of motivation to take girls to school, especially so, in a mixed one. After a lot of discussion, it was resolved to separate the girls from the boys so as to achieve better results. Hence a girls’ school was started at Gayaza.

Initially education was free. As the school advanced , the senior classes were required to pay 50 cents per week while the girls paid ₤2 per year. The parents were unwilling to pay this money. Hattersley quotes parents saying: “What! ₤ 2 a year for a girl? Why? We could buy another cow for that!”

In June, 1904 the Church Missionary Society (CMS) held a Missionary Conference in which it was resolved to build two new schools: one at Namirembe Hill and another at Budo. The mission of these schools was to produce men fit to serve God in church and the State. The missionaries had a dim idea of when their mission would be achieved. Surprisingly, by the end of 1904, four brick houses, a school house and a fence were constructed. It was a boarding school for the sons of chiefs and was named Mengo High School. The subjects taught were Writing, Arithmetic, Geography and Elementary Science.

The formal opening of this school was performed by His Majesty’s Acting Commissioner, Mr. George Wilson, C.B. on January 25, 1905. The opening of Mengo High School did not mean the closure of the original school. Rev. C.H.T. Ecob took over the superintendence of the old school (Kayanja) while Mr. C.W. Hattersley devoted his energies to the new school. At this time the school had a capacity of 40 – 50 boys. In 1906, a group of 22 young men mostly from the Basizi proceeded to King’s School Budo. In the following year a group of nine young men, including Festo Luboyera, also joined Budo.

In the meantime, Mengo High School experienced a rapid increase in the number of boys during the first two years. The school also had boys coming from outside Buganda. They came from Busoga, Toro and Ankole. Due to increased demand for education, it was decided that the capacity of the school be expanded to 250 boys. Consequently, the original building was also converted into a dormitory. In addition, two new dormitories were erected and the cost was met by the local people. Furthermore, a large building to which the then Bishop of Namirembe contributed ₤500 was also erected. It was formally opened in November, 1907 by Mr. Winston Churchill, M.P. He was accompanied by the Governor, Mr. H. Hesketh Bell.

THE SCHOOL HAS BEEN SERVED BY THE FOLLOWING HEAD TEACHERS 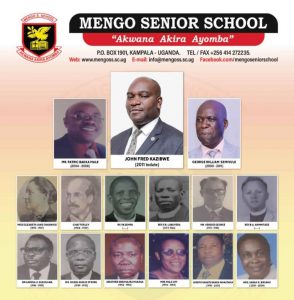 Mengo Senior School believes in empowering its staff and students to cause change in the societies they live in. The School’s core values are:  Fearing God, Respect of persons and property and Integrity. Premised on these values, there has been a translation into observable actions which the students and teachers can practice to benefit the church, state and the entire world.

“AKWANA AKIRA AYOMBA”. This literally means that one who aspires to make friends is better off than one who engages in quarrels ie Make friends and never foes.